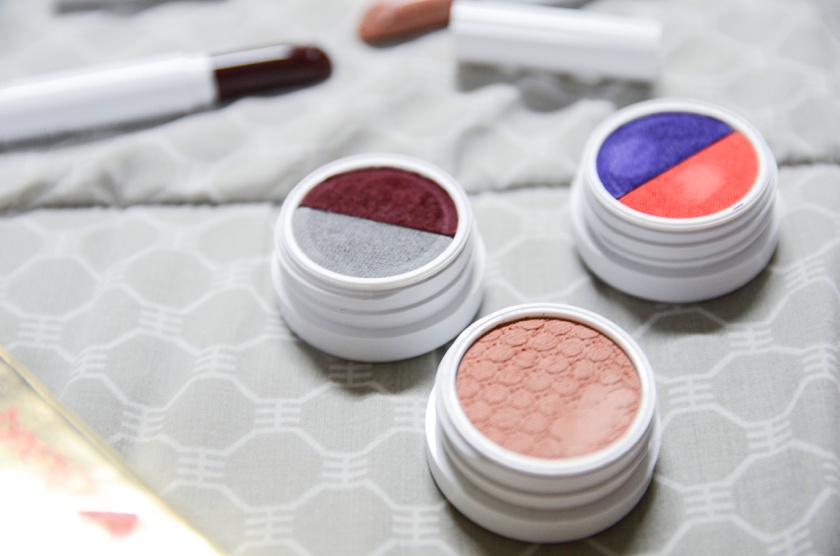 As you have probably surmised from the number of items on this post, I’ve failed my 12-item purchase limit for 2015. Now, I pretty much cut it down to 80% of what I probably would’ve bought had I not imposed my limit, so I’m not too bothered by it. Anyway, the title of this series is “Gone Forever” which basically means that I’ve decided to be an asshat and post about items that are… gone forever.

The item in question for this post is ColourPop Fetch, Please! which is one of their earliest collections, a collaboration with actress Isabelle Fuhrman. It’s nowhere to be found on their website, but here’s an interview about the collection. 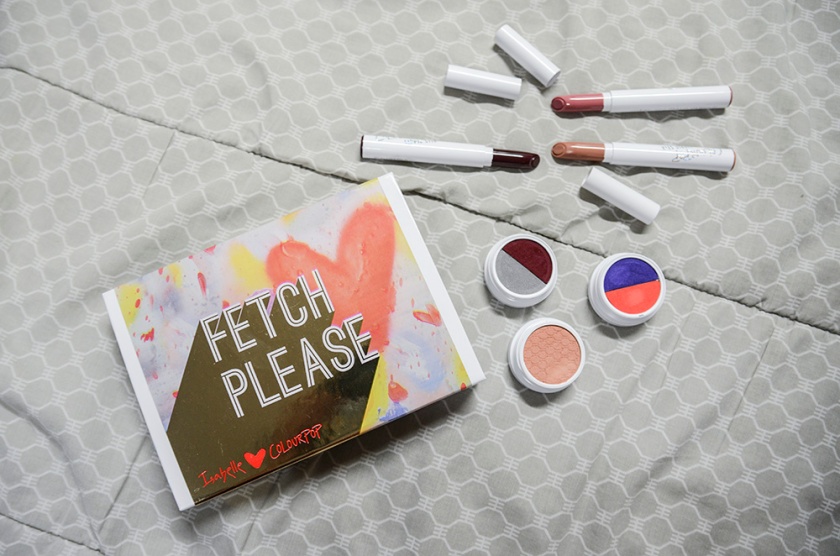 Fetch, Please! is comprised of 6 items: 2 split-pan pots (one’s pressed pigments, the other’s regular eyeshadow), a Super Shock Shadow, and 3 matte Lippie Stix (this name needs to die). To be honest, I bought this set just because it was on sale and I was buying a thing—more on this later—and wanted to save on shipping.

I’ve already tried the eyeshadows (reviewed here) and the matte lip stuff (reviewed here), so I suppose I’ll just say that they are pretty much the consistent with my ColourPop experience so far.

The three matte Lippie Stix are called Precocious (pale muted nude), Squeeze (soft mauve pink), and Paramour (deep dark blackberry). I’m a little scared of Precocious, but it seems like a good “mixer” color to tone down other lip shades or provide a base, maybe? Both Squeeze and Paramour are right up my alley. ColourPop Matte Lippie Stix aren’t true mattes. They do have a bit of a shine, though it’s easily dabbed away. I don’t experience any drying with them, but I know other people have. 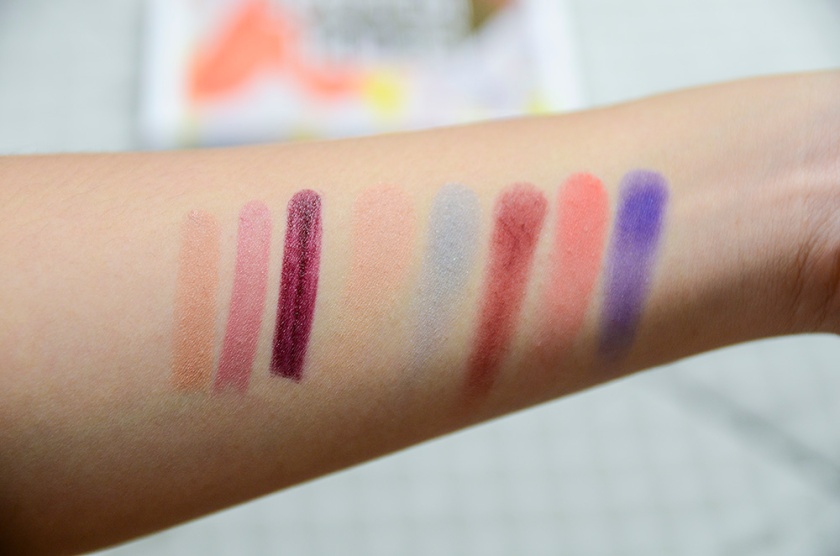 I feel a bit lukewarm about this set, when taken as a whole. And I don’t understand why, because I’m pretty in love with every single bit of it (except Precocious, oops!). Just a Sip is a beautiful peachy-neutral which looks a bit standard at first but then you realize that there’s just something more about it. I can’t explain it. It’s described as a “warm dusty peach” and was inspired by Marc Jacobs’ 2012 Spring Louis Vuitton collection looks. 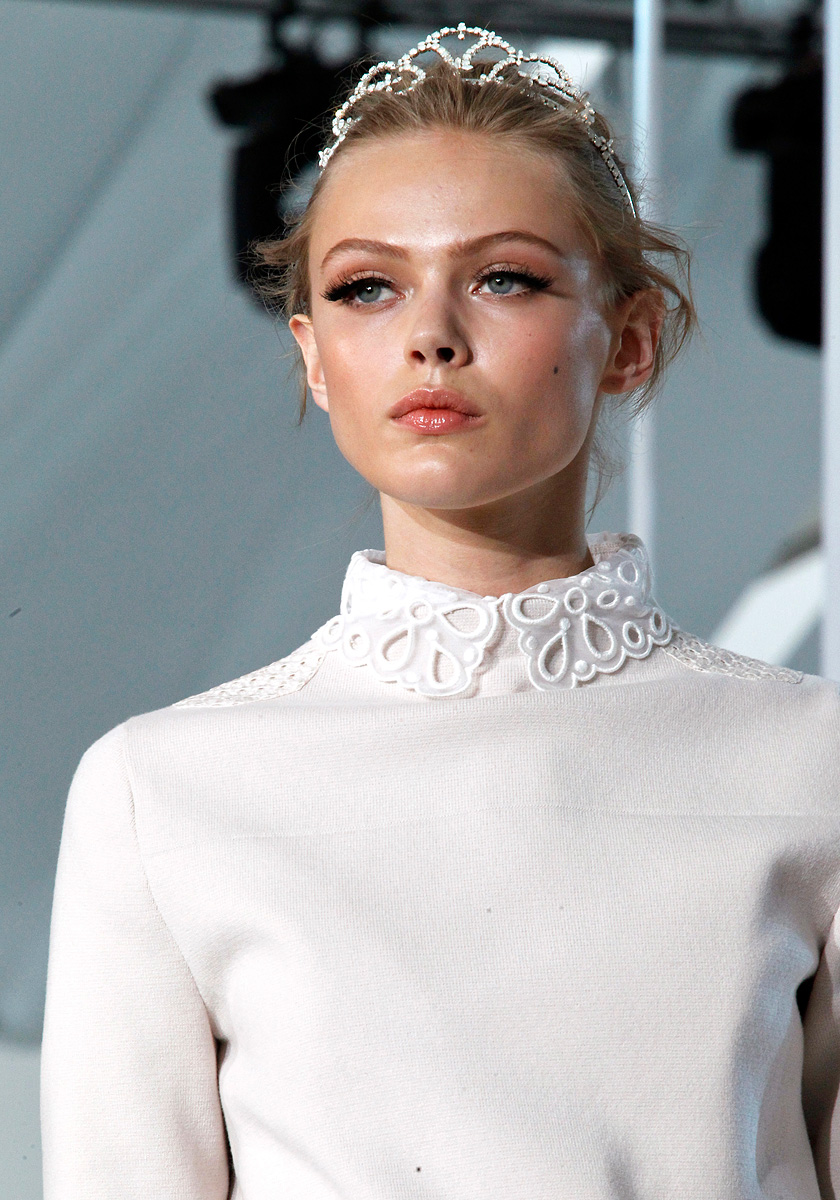 I know it’s not going to look as cute and poppy and nuanced on me, but it’s still a pretty shade to have. 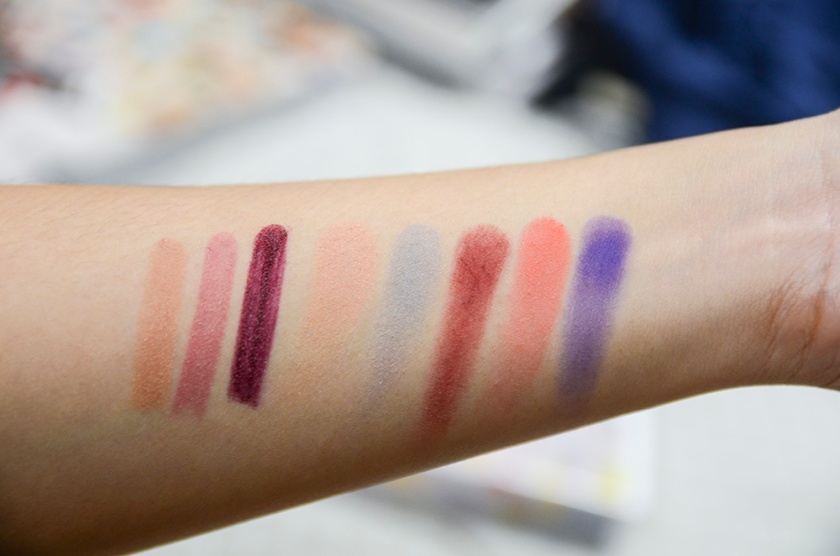 I love the Lovey Dovey/Hunger duo. I’ve worn Hunger, a deep maroon, a little bit on my lower lashline for Halloween and I was definitely feeling it. It’s pretty much unlike any color I have already, so there’s that. I’m not on good terms with grey eyeshadow yet, so it remains to be seen just how well I get on with Lovey Dovey, a true midtone grey, though let it be said that I do quite like it.

Squint/Liaison is a cute duo to have. It’s classified as a “pressed pigment,” I assume because of the neon pigments. Much like the Urban Decay Electric Palette—also classified as “pressed pigments”—these are technically eyeshadows that use neon coloring that’s not FDA-approved for use around the immediate eye area. You could; it’s approved in other countries, though I suppose they just want to cover all their bases. 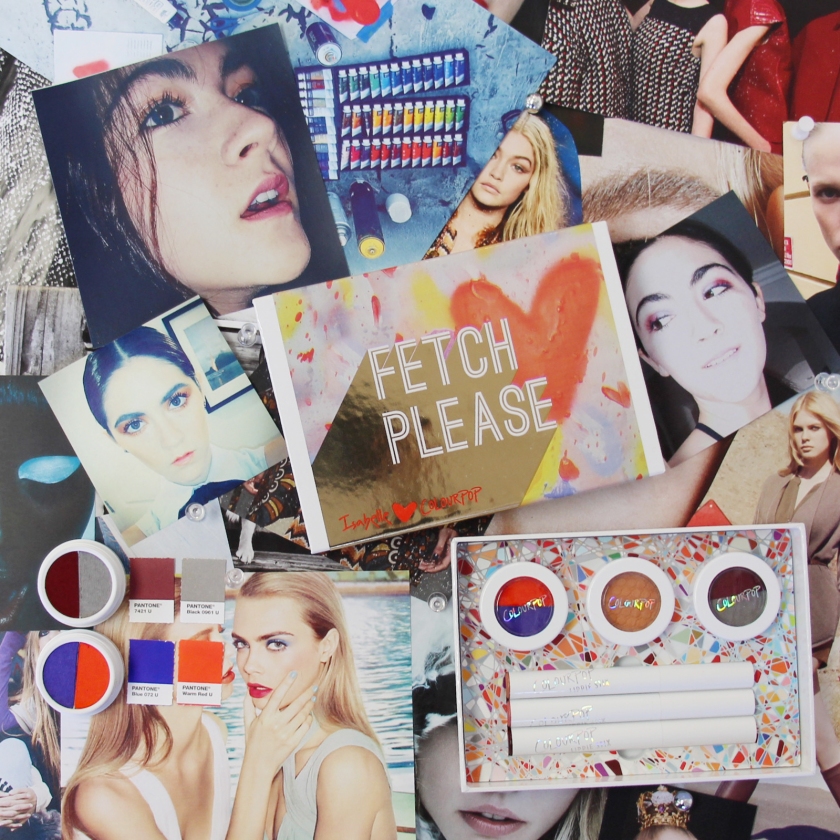 Anyway, Squint is described as a neon orange red, and it’s rather pretty. Liaison is a “vivid violet-blue” that I’m kind of really in love with. I think this is actually a pretty well-rounded set where you’ve got enough space to play around with different types of looks, but also have a nice neutral option, that’s still fun to play around with. (That was an awful sentence.)

In any case, the good thing about ColourPop is that they have tons of different, budget-friendly shades to choose from (Look at their pressed pigments!), recently expanding into eyeliner territory.

I’m going to be posting looks~ soon. I’ve been rushing out of the house to make it to the office so I haven’t really been able to take good FOTDs… but I’m going to try. Haha. No promises, though wish me luck!