I have slacked off on Le Métier de Beauté's Beauty Vault VIP posts, having stopped at the January one. Truthfully, I waited a long time before finally picking this up at the mail forwarder. I look for spoilers and when I saw what was in the January box, all desire to retrieve it left me. LOL, a tad bit dramatic, but after such a great run of products, who wouldn't find a single bottle of makeup remover disappointing?

The January box came with no information card at all, so it pretty much heightened the feeling of “Is this it?” However, I have to say that I am a fan of bi-phase makeup removers. My favorite is Laneige, but this is really excellent. There was a bit of a kerfuffle with this box, too. A user on the forum I go to (Makeup Talk) found an identical product sans the brand name on Amazon, selling for $29.99 and was on sale for $19.90. This is the response that user LisaLeah got from the LMdB CSR:

“We developed our make up remover almost a decade ago, in conjunction with a manufacturing partner. We shared the costs and in return gave them the right to sell it direct, should they want to earn back those costs. We are assuming that the listing on Amazon is them doing what is within their rights.

Meantime, this make up remover has been only used in The John Barrett Salon at Bergdorf Goodman and as a back bar item at our make up counters – never sold. We get thousands of requests a year to sell it, and do not.It's an expensive product to manufacture and features a lot of process technology to produce.

We sent it out in the January box as a test to see if our fans liked it. We do not see the VIP program as an individual product per month, but as a collection you amass over 12 months. So the items all work together.We hope you use the make up remover and value it as part of the larger program. We would love your feedback on its performance.

Anyway, the bottom line is that this is a very good product and I would actually repurchase this when I run out!

Because of this weird product, I thought I'd do a six-month recap of the subscription so far. You can see that under the cut here, if you'd like.

OK, a little background on this subscription. Le Métier de Beauté is a small luxury brand based in New York and last year, they launched a monthly subscription box, averaging just under $30 per month for a year. The catch is that you had to pay upfront and be tied to it for a full year. I was going back and forth on it, then I decided to pass on it, but my girlfriend saw my distress (lol) and decided to get me the sub for my birthday/Christmas present when they reopened about fifty or something slots the following month.

The sub is only open to the U.S. (because of shipping costs), so I ended up mailing it to the forwarder, which I pay about $15 a month. I'm just sharing this, so that I can properly assess if it is all worth it. Of course, I basically got everything for free, thanks to Sarie, but. You know. In general, is it worth it?

6 Month Recap
Here's just a collection of items from the past six months. I actually have the February box already, but I'll save that for later, as this is a great midpoint. I think the box was $348/year plus tax.

From this box, I think I would repurchase the lipstick in a different color, but pass on the rest. I'd repurchase a Kaleidoscope, but definitely not a lip one. Perhaps an eye or face kaleidoscope is more worth the $95.

The September box offerings were two crème eyeshadows that kind of failed to deliver. I personally like them, but a lot of people were unimpressed. These retail for $32 each and were briefly sold at Saks. The box's total is $64. I would probably repurchase the champagne shade if I ran out or if it wasn't discontinued.

In the October box was a skin care item, the Peau Vierge Dark Spot Corrector ($125), which has been a skin care favorite of mine ever since I started using it. I would definitely repurchase this, but the price is making me sad, since the contents of this is just 0.5 oz. as opposed to the usual 1.0 oz. 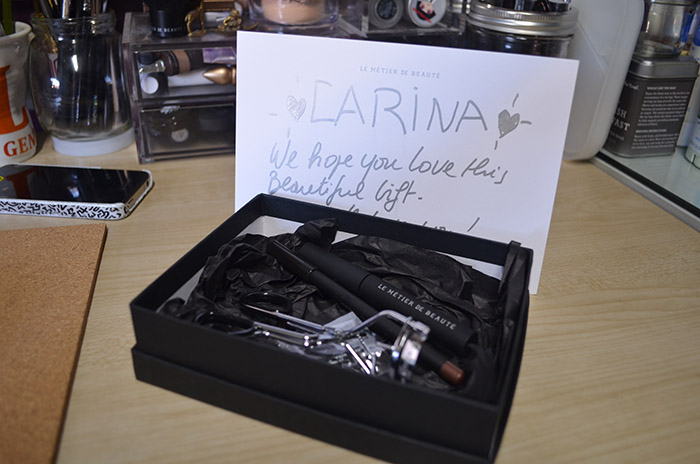 This month, we got a fun box—a Peau Vierge Lash Growth Serum ($95), an eyelash curler ($18), and a Dualistic Eye Pencil (in Tamarack; $36), all of which cost $149. I would definitely repurchase all of them, but think twice about the lash growth serum. Even if it worked super well (my lower lashes exist now!), I think the price point is just a bit too high for me. I'd rather add $30 for the Dark Spot Corrector.

Yay, another Kaleidoscope. This time, it's a Face Kaleidoscope (in Cheeky Chic; $95), which was perfect since I've never tried an LMdB cheek product before. This was such a great inclusion. I love it so much and would definitely repurchase it.

So, for the past six months, the items have totaled $648. Le Métier de Beauté could slack off for the next six months and we still would have gotten our money's worth of LMdB. The thing is, a lot of these items are very expensive to begin with and I would never think to purchase them if I were to buy them from actual stores. On the other hand, this box offered me the opportunity to try a bunch of things from Le Métier de Beauté that I wouldn't have picked for myself.

And that's it! I'll post the February box sometime this week, I think. Hope you have a great week ahead!