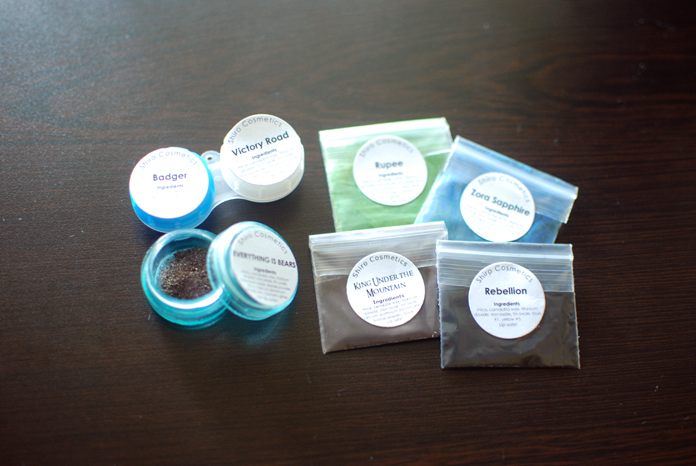 If you’ve purchased from Shiro Cosmetics before, you’d know that they send candy and sometimes, sample baggies out with your order. I’ve had these for a while, but have never gotten around to transferring them into little pots until recently. I thought it would be a messy affair, but it was quite easy and fuss-free.

I’d write up a tutorial, but you just literally pour out the contents into a small container (like this mini pot or an old contact lens case) and that’s that. For easier cleanup, do this with a paper towel over your desk.

Shiro also seals each baggie with a circular sticker of the eyeshadow name, with ingredients and an indication of whether or not the shade is lip-safe. A+!

I don’t have a lot of containers, so I’ve only decanted three eyeshadows so far. From L-R, we have Everything is Bears, which was a Color of the Month, Victory Road, and Badger. I bought all the shades except Victory Road.

Everything is Bears is a “Rich, dark brown packed with gold glitter (because bears are the kings of the forest) and red sparks (representative of the blood of mauled hikers).” I think the brown base doesn’t show up as deeply as it would have you believe in the pot.

Victory Road is from The Super Effective Collection. It’s a “Dark gray-green with a lighter green shimmer,” that sort of makes it look like a duochrome, in a way. You can definitely see the lighter green more. I quite like it and am happy to see that it’s still available for purchase.

Badger is from the Badger-Mushroom-Snake Collection, and it’s a “shimmery blackened chocolate with sparks of uncaring honey.” This is freaking beautiful, you guys. Normally, I have a hard time telling the many colors of sparks and glitter there is in a shade. I just know that there’s something shiny in it and I don’t really successfully inspect the color. But wow, this was gorgeous and there was a sort of red quality that really shows up starkly against the rich chocolate brown.

Here’s another set of swatches to show you the shifts in color. I find Victory Road and Badger to be really stunning and I’m likely to repurchase them one of these days. 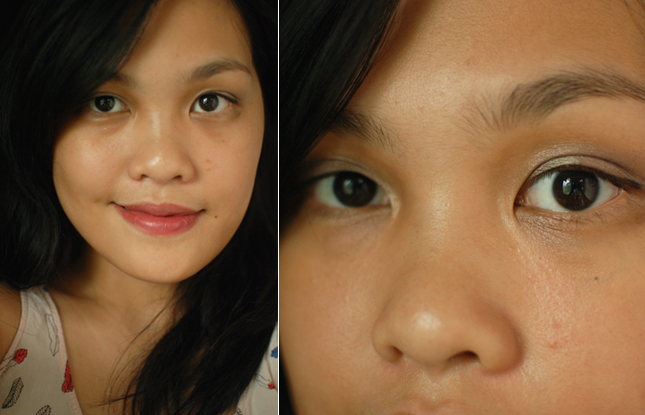 Wearing Everything is Bears, as a liner, which isn’t such a good idea. The glitter fell on my lashes:

I have four more unopened samples, but I actually have two of the ones she sent me already. All in all, I’m a big fan of Shiro Cosmetics, and I’m happy that they are generous enough to send along some samples sometimes when you make a purchase.