Made-Up History is a series I made up in which I try to make looks based on works of art. In this week’s installment, I take on a work by Andy Warhol called Marilyn Diptych. To see the rest of the looks, click here.

This work of art was made on the year my mother was born. It was also the year that Marilyn Monroe died. During this period, Andy Warhol created more than twenty silkscreen paintings of her, which remain to be some of his most recognized work.

Marilyn Diptych is a duplication of a promotional image of Marilyn Monroe for her film Niagara, which was made in 1953. Setting it apart from the other images, this particular work has two renderings of the same image—one done in color, and one done in black—beside each other.

Warhol was famous for the things he would say, one of which was Art is whatever you can get away with. While I don’t necessarily believe that to be totally true, it seemed to be what propelled him to be as risky as he was. Warhol broke the rules when they were made, crossed lines that were meant to be boundaries and pretty much did whatever the hell he wanted to do.

To take a commodity and multiply it was almost an antithesis to what art was supposed to be. These works of art and masterpieces were special partly because they could not be replicated. Taking even just the image of something readily available to the masses—a Campbell’s soup can or even just the visage of Marilyn Monroe—did not adhere to the people’s common idea of art at the time.

Fine art was a high-brow, almost lofty concept that society snobs and art elitists felt they could (or deserve to) enjoy exclusively, but Warhol’s approach brought it to the level of the commercialized masses (so, “pop art”) and he created something that everyone, regardless of social status, could enjoy and at least recognize.

These duplications may not seem special fifty years later, but these were monumental at the time they were made and first consumed by the public, and were highly relevant most especially then. To try and encapsulate a person’s being, by using their image and multiplying it, doesn’t seem quite enough or sufficient or true. Rather than making the deceased present, it feels as though you heighten the feeling of their being gone.

I’m not sure if that’s what Warhol intended, or if he just did whatever he wanted to do. All I know is that making work that you like, despite it being “unacceptable” and unheard of during the time you are alive, is incredibly brave and, I imagine, immensely liberating.

Anyway, I tried to be a little adventurous for this look and tired really hard to incorporate the black-and-white part of this diptych, too.

The pink is in my cheeks, the blue as a liner under my eyes, and the yellow and orange are my eyeshadow. The black & white part of it came as the messy liner and mascara. I decided to keep the lip neutral so I don’t overpower the other colors. It seems like a lot, but I think it actually turned out quite nicely. 🙂

And here are the products I used: 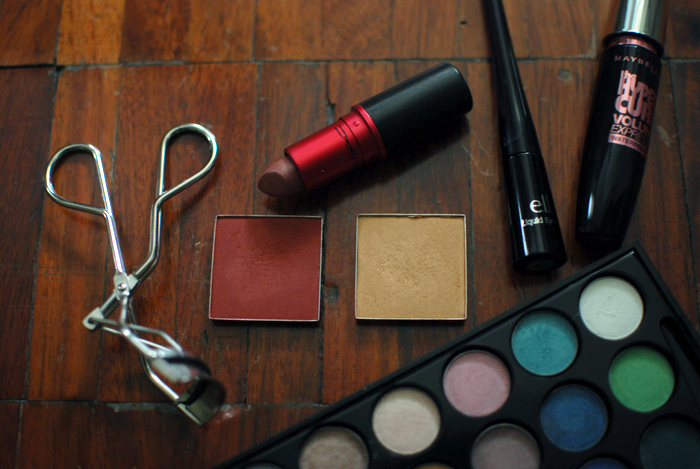 I forgot to include the hot pinky blush I used, which is Tarte Amazonian Clay 12-Hour Blush in Flush, in case you were wondering. Eyes are a gradient made by two Fanny Serrano eyeshadows: Honey Glitter & Potter Clay.

The messy eyeliner was made by dotting the e.l.f. liquid eyeliner on my lid at random then smudging it before it set. Mascara was used on my bottom lashes to make them appear thicker, but I think I should have added a little more. Last, but not the least, I used MAC Viva Glam V for a neutral, pretty lip.

And that is it for this week’s installment of Made-Up History! I hope you enjoyed it, and I’m sorry it was so, so long! Stay tuned for the next one. 🙂