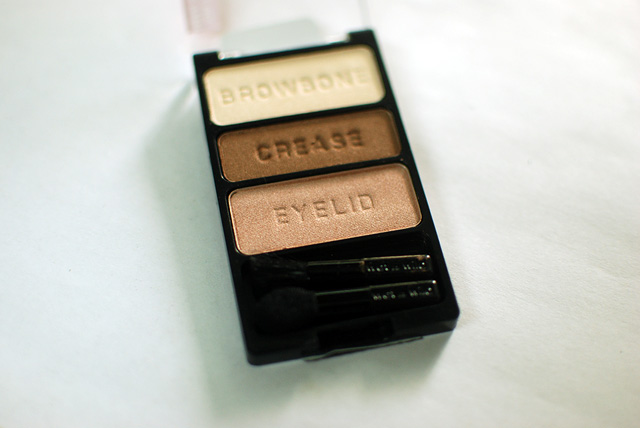 For people starting out with makeup, it’s not really a good idea to splurge on high-end eyeshadow palettes. I mean, just look at this douchebag.

Some of the best purchases a budding makeup enthusiast could make are the Wet n Wild eyeshadows and eyeshadow palettes. Here are two of the best ones on the market, a trio called Walking on Eggshells and an eight-pan palette called Comfort Zone.

It got a lot of rave reviews, and honestly, it was the only color trio that I felt safe enough to try out just because it was a neutral brown palette. As is typical of Wet n Wild Eyeshadow Palettes, Walking on Eggshells has designated specific functions for the shades.

The lightest, cream shadow is for the browbone. The light, champagne color is for the eyelid. The darkest shade, a medium brown, is for the crease. Once you’ve been playing around with makeup, this will feel like a sort of affectation, but it is a very helpful and very simple guide for beginners. This is also helpful because the shades are not individually named.

The palette comes with two, single-ended applicators—one, a sponge tip, the other a small brush. All the shadows are beautiful and buttery, though a bit frosty! The browbone shade, if you use it as intended and apply it on the browbone, screams 90s to me. I think it’s because I’ve been watching Buffy the Vampire Slayer, and Glory always has a shimmery browbone.

The other palette I’ve gotten and tried is an eight-pan palette called Comfort Zone. The palette mimics the layout of the color icon trio for two looks, with an added darkest shade—the “definer,” which can take the place of the eyeliner, or just be used to deepen the crease or add depth to the outer corner of the eyes. While the shades are split into two columns, you can of course mix and match the shades.

Here are a few swatches. I followed the order of the colors on the palette:

These are crazily pigmented and buttery, though the ‘definer’ shade in the first column and the ‘crease’ shade in the second seem to be a little less buttery and a little grittier than the rest. They are still very pigmented, though.

Here’s a few more swatches for a better look at these shadows’ complexity. Yep, some of them can be complex. Watch the ‘definer’ shade of the second column’s duochrome action:

That confused shade is a large reason why I bought this little palette. Be-a-u-tee-full. The first three colors of the first column are a lot similar to the colors of the Walking on Eggshells trio, if a only a tad bit rosier. Comfort Zone is also dupe central. I’ll show you what I mean in the next couple of days.

And, of course, here are some looks I made with these palettes, to prove that they are very much worth every penny, and can perform nearly as well as their higher end contenders! The pictures are kinda funny, but just to give you an idea of the versatility these palettes offer, I’m going to post them. 🙂

For the first look, I basically used the entirety of the first column, as detailed by the “chart.” For the second look, I made a gradient using the ‘browbone’ and ‘eyelid’ shades of the second column. Then, I took the ‘crease’ shade and put it on my crease, then for the eyeliner, I used both ‘definer’ shades together.

Here is another look I took on a different day, using a variety of shades from both palettes. You can only really wear one kind of look with the Walking on Eggshells trio, but if you add a little bit of colors from the Comfort Zone palette, like that pop of green on the inner third and the deeper pinky shade on the rest of the lid, it can make a lot of difference.

I guess my main gripe about this palettes is the lack of textural variation. They’re all pretty darn shimmery when you use them all together, without working in satins or mattes. This is why I think that, when you are already exploring different textures, these can’t be standalone palettes. I don’t think a lot of people would actually put the browbone shades on their browbone, for one thing. I’m sure they’re still usable, though I would personally use them as a lid color or a highlight, more than anything.

Another thing: these turn up on the eyes so much better in person than in photos, but I suppose that’s really more of my fault than the eyeshadow’s fault.

Anyway, I still think these are amazing and would purchase them even if they were a little bit more expensive, as they are truly cheap, versatile, and are very good quality. At least, in my opinion. You could probably live on these two palettes (both under Php 500) and maybe 1 matte and 1 satin shade for a really, really long time, if you’re on a budget or something.

These palettes are available at Watson’s. You have to kind of try your luck because not all branches keep these colors in stock. Hope this helped you out and thank you for reading. 🙂