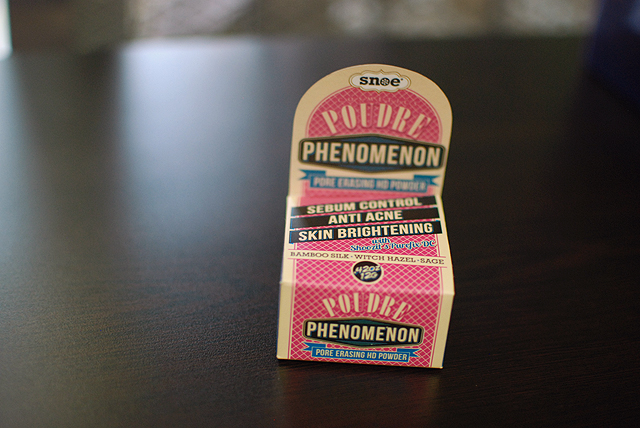 The other item I got from Snoe Beauty was the Poudre Phenomenon, a “pore erasing HD powder.” I didn’t get the seemingly more popular Poudre Extroadinaire, which is a “loose finishing skin care powder,” because I thought it was a loose foundation and I didn’t really use foundation! Also, “pore-erasing” was too hard to resist.

What is the Poudre Phenomenon?

As you can see, the design of the box is still very visually-appealing. The pot, however, is not. It’s made of plastic and I find that the lid is a bit “kiddie,” even though the blue is from the label. I don’t know. I’m just not a fan, I guess. Minor detail, though. 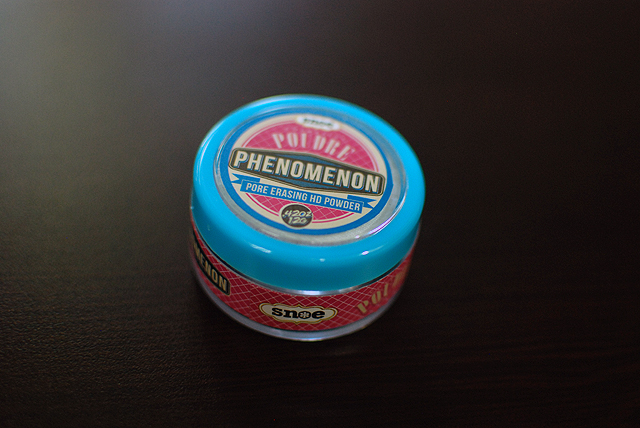 When you open it up, there is a sort of applicator. I’m not sure what these are called but it’s certainly not a puff. It’s quite soft though. Under that is a sifter to dispense the powder well. I was so confused with how to use this because the sifter’s sticker was a bit hard to remove so I wondered if I was supposed to.

So I lifted up the sifter and thought that maybe I should dip the applicator directly onto the main compartment (which, by the way, you can see is freaking full, yay) and go from there. WRONG. That was an even messier ordeal. In the end, I realized that I was just a dunce and you had to take the sticker off and make use of the sifter, which made for better application. 🙂

So how did it fare? Well, I wouldn’t say it is entirely pore-erasing, but I think it did reduce the appearance of pores and blemishes, especially if you will look at me from a fairly far distance. Funnily enough, it battled a bit of my redness, too! As you can see, it applied very translucently, which is a big surprise considering how much it looks like baby powder. I was so scared of trying it out because I didn’t want to look like a ghost, you know? But wow, it doesn’t even leave a white cast.

I want to give this product an award for oil control, though!

I’m not the oiliest person, but I do get a bit greasy from time to time. Since most powders and face products break me out, I don’t use oil-control products, aside from the film that you pat onto your face. I decided to take this out for a test drive when I went semi-last minute Christmas shopping with Sarie. I took the train and met up with her at ze malls. Y’all know how freaking hellacious it is to commute in this country. Usually, I would have sweated buckets and by the time I get to meet up with people, it’s like I just shouldn’t have bothered with a shower because I’ll look like crap anyway.

That was not the case yesterday, thanks to the Poudre Phenomenon! Seriously. I kept patting my face because I couldn’t believe how oil-free it was after heat, humidity, and being stuck with people in a train for half an hour. I know constant patting probably not good for my skin, but I was just so amazed.

Another plus is that after eight hours of wear is the only time I saw signs of oil. The packaging says you are meant to reapply it as often as you’d like, but that was the only time I felt like I had to.

Yet another plus is that I didn’t break out. Yay!

VERDICT: The Poudre Phenomenon only semi-blurs blemishes and pores, but is a winner for oil-control. The powder is translucent despite its baby powder appearance. It didn’t break me out or smell like anything.
Will I repurchase? Yes!
How much? Php 899.99 for 12g or 0.42oz.
Where to buy in Manila? Online or these places.