I heard about NARS’s collaboration with Andy Warhol back in late August, but really didn’t think much of it after reading not-so-stellar reviews. However, upon a second look, I’ve found a few products I wouldn’t mind trying out.

For the record, I love NARS. The first product of theirs I’ve ever tried was, of course, Orgasm (in blush form). Scandalous name, but really after typing it out and saying it so many times, it has no meaning to me anymore. Except a pretty pink flushed blush, that is!

It would be a while before I purchased any more NARS products, mainly because I didn’t really know what I wanted to try out. Then, I came back to a NARS counter and purchased a sheer, dark lipstick (Vendanges) and my first hint of love for eyeshadows (Ramatuelle). And now I’m pretty much in love.

So, the Andy Warhol collection comes in three “waves”—a holiday collection, a gift set collection, and one that’s exclusive to Sephora. I won’t bother with the Sephora collection, because they don’t accept Philippine credit cards anyway (tears). 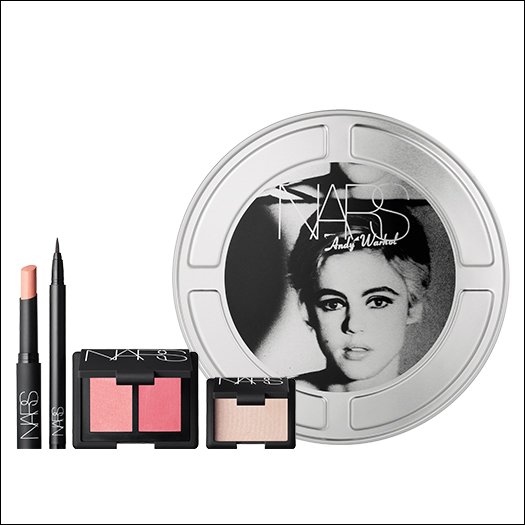 Edie Set ($75)
The Edie Set comes with Film Star, a “60s nude pink” Pure Matte lipstick (mmm, delicious!); the Edie eyeshadow, cream with a little bit of shimmer; Carpates Eyeliner Stylo, black; and a mini blush duo in Deep Throat and Amour. All of which come in an authentic 16mm film canister donned by the visage of the beautiful and tragic Edie Sedgwick. Ideally, this set will enable you to replicate her very iconic look. 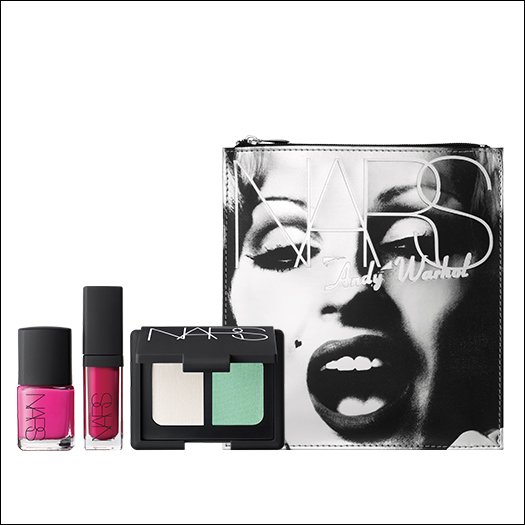 Beautiful Darling Set ($49)
Named after Candy Darling, this set comes with the Darling Mini Nail Polish, an electric pink; the Femme Fatale Duo Eyeshadow, with a sheer white shimmer and fresh mint green; and Woman in Revolt Mini “Larger than Life” Lip Gloss, a hot pink, which you can keep in a small cosmetics bag. I highly doubt that I can pull any of these colors off, but it’s an interesting enough set to add to your collection, if you’re the type to collect. 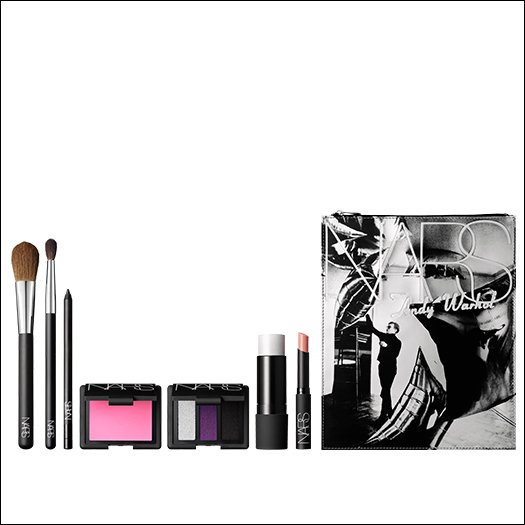 Silver Factory Set ($200)
Celebrating that free, glamorous 60s vibe, Silver Factory has an aluminum multiple of the same name; Shadows, an eyeshadow trio in matte black, deep purple, and silver; Chelsea Girls, a nude, fleshy Pure Matte lipstick; Desire, a cotton candy pink blush; Via Veneto, a Larger Than Life black eyeliner; and two brushes: a large domed eyeshadow brush, as well as a blush brush. This gift set comes with a deluxe cosmetics bag, and at $200 a pop, it damn well should. 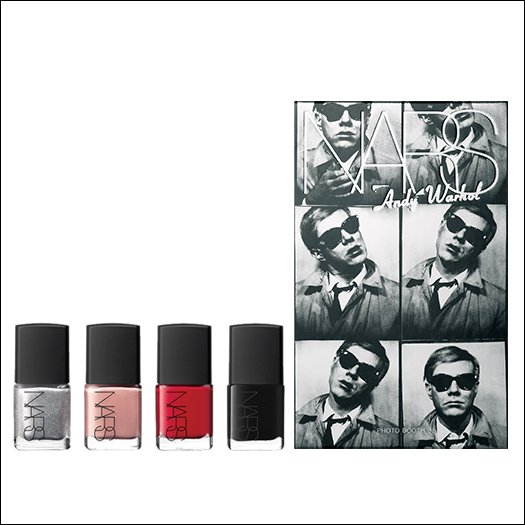 Photobooth Nail Set ($35)
I’m not a polish person, but I feel like this is a nice collection of “basic,” classic colors that even a polish dunce like me could put on and appreciate. Colors include Silver Factory (aluminum), Chelsea Girls (modern beige, whatever that means), Back Room (black), and Soup Can (red, presumably taken from the Campbell’s can).

Self-Portrait Eyeshadow Palettes 1, 2 & 3 ($55 each)
These eyeshadow palettes feature Andy Warhol’s self-portraits in three different color-ways. Self-Portrait 1 has black, bright periwinkle blue, and vibrant green. Self-Portrait 2 has black, white, silver. Self-Portrait 3 dark brown, rose pink, heather blue. While it’s a great idea, aesthetically, especially with how it resembles Andy Warhol’s own art, I think that usage might be a bit more problematic. Though I do think it’s just an overspray, in which case you can use the colors freely, then it seems a bit pointless to even add the silhouette in the first place. Maybe that’s why they emblazoned the mirror with Warhol Witticisms. 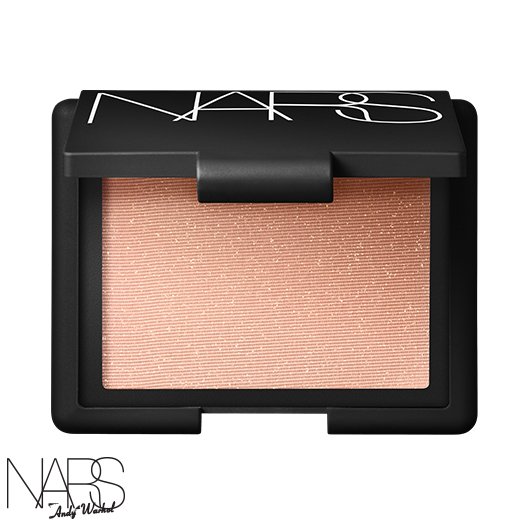 Satellite of Love Highlighting Blush ($28)
First of all, the name makes no sense. It would make sense if this was a Lou Reed collection, but it’s not. Anyway, I can’t lie. I WANT THIS BADLY. Despite the name misattribution. And the chunky gold (the color is listed as sparkling gold sand). OK, maybe I can do without the sparkling gold sand. And I probably don’t need this, because of the météorites—I seriously don’t have to bother with highlighting anything anymore—but the Bad Decision-Maker part of me wants this. It’s just so freaking pretty. 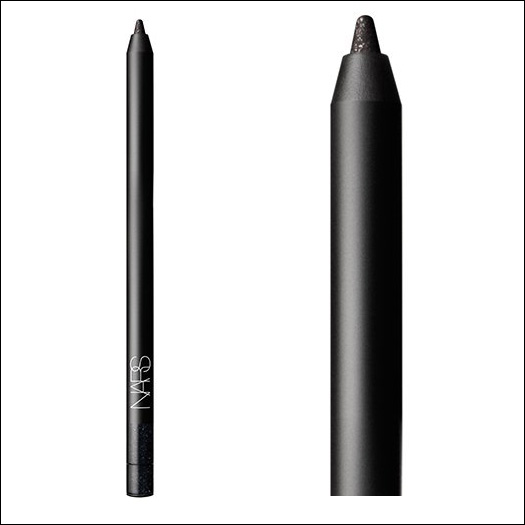 47th Street Larger Than Life Long-Wear Eyeliner ($23)
This one’s reaaaally pretty, too. I’m not going to lie. But I don’t know if I can pull off a black eyeliner with pretty sizable silver shimmer. Really, really pretty though. 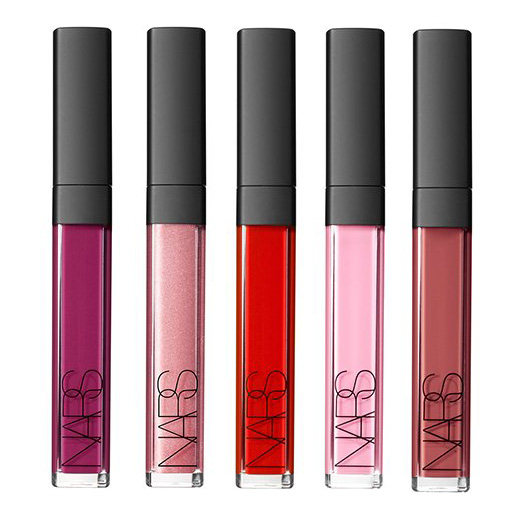 Larger Than Life Lipglosses ($26 each)
The collection has lipglosses in five different shades: Penny Arcade (raspberry), Candy Says (shimmering strawberry pink), Holly Woodlawn (bright orange red), International Velvet (pink glacé), and Viva (a rich rose). I’m not a lipgloss kind of person, but my eyes are set on a tube of Viva. 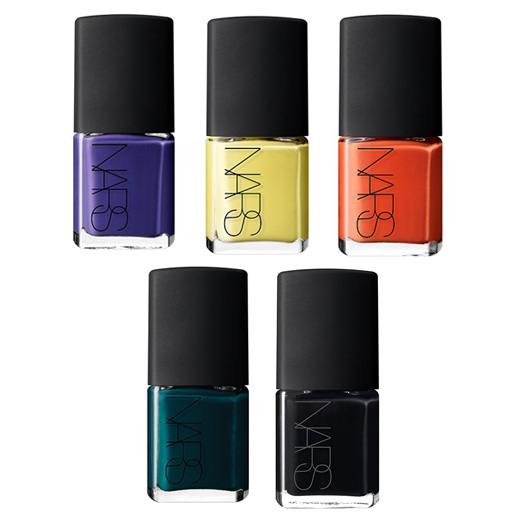 Andy Warhol Nail Polish ($18 each)
Clockwise from the top, we have New York Dolls (Purple), 15 Minutes (Lemon Yellow), TV Party (Vivid Orange), Back Room (Black), and Superstar (Teal). Again, not a polish person, but these colors are quite lovely and somewhat adventurous! It’s honestly a color combination I would consider for a design project. 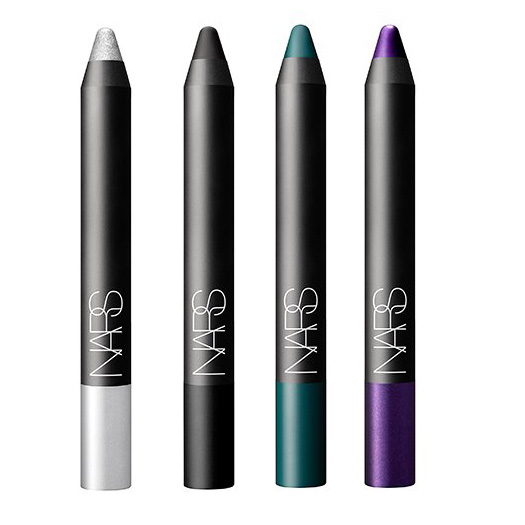 Soft Touch Shadow Pencils ($24)
Last but not the least, we have the controversial Soft Touch Shadow Pencils in four colors: Silver City (silver), Empire (Black), Heat (Teal), and Trash (Vivid Purple). They are controversial in that no one can seem to make them work. They apparently crease like crazy, which has put me off of them, though I do want to try using Calabria at some point. All of them are fairly wearable shades, I would imagine. I haven’t tried this particular line of products yet. I don’t think I’m ready to drop that much money on a single product that nobody has been able to make work.

So, that’s it! I personally wouldn’t mind having a few products, namely: the Edie set, the lipstick that comes with the Silver Factory set, Satellite of Love (even though its name makes no sense), and Viva! How about you? Are you looking forward to getting any of these?

The collection hits NARS counters on November 1. I have no idea if they will be in the Philippines by then, but I assume they will be. I am on a makeup ban right now, so I hope the stocks hold out a little longer, if they have, indeed, hit our shores.

All photos are from narscosmetics.com